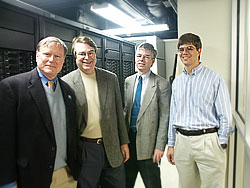 On Dec. 14, the Scripps Institution of Oceanography at the University of California, San Diego, dedicated one of the world's fastest supercomputers devoted entirely to ocean modeling. Partnering with the California Institute for Telecommunications and Information Technology [Calit²], the National Science Foundation, the Office of Naval Research and IBM, Scripps obtained two PC "clusters" with a peak performance of 500 billion calculations per second. 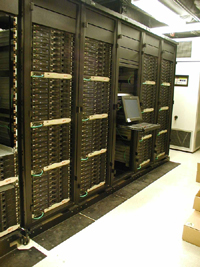 Each 128-node cluster has 256 CPUs, and both have been installed at Scripps' Center for Observations, Modeling and Prediction (COMPAS). "The long-term success of our efforts at Scripps to model ocean and atmospheric conditions depends on having the requisite computing resources," said Detlef Stammer, COMPAS director and associate professor in the Physical Oceanography Research Division of Scripps at UCSD. "The clusters will also let us grapple with new issues that require intense computation--issues such as carbon dioxide sequestering in the atmosphere and the ocean, and the effects of biology on the physical state of the ocean.

The hardware was installed by IBM as part of its long-term commitment as a founding industrial partner of Calit². "IBM has been a great company to work with," said Larry Smarr, director of Calit² and professor of computer scienceat UCSD's Jacobs School of Engineering. "This is a prime example of the synergy between researchers and industrial partners. They're teaming up on projects that will further our goal of using the cutting edge of technology to solve problems critical to our state."

COMPAS is a concerted and inter-disciplinary effort in data analysis, numerical modeling and data assimilation for ocean research at Scripps. Research areas that will benefit from the new clusters include: 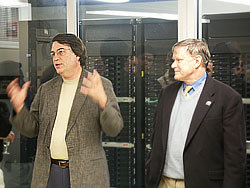 Noted Charles Kennel, director of Scripps and a member of the executive committee of the San Diego Supercomputer Center (SDSC): "Scientists using existing facilities were increasingly hitting computational roadblocks. Together with the other hardware already available at SDSC, these IBM clusters will allow Scripps researchers to handle the larger and detailed data sets that require high-resolution numerical modeling both for data assimilation and for dynamic interpretation." SDSC has played a key role in getting the hardware up and running. "Phil Papadopoulos and his team at the supercomputer center did most of the design work on the clusters," said COMPAS director Stammer. "We are also counting on SDSC to provide ongoing system support for the system."